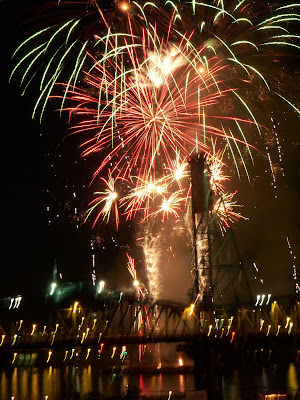 Well it was almost a week ago, but I had a fabulous July 4th.

After arriving back from my camping trip, I had a lovely bath and got all cleaned up. Camping does lead to a mucky Caroline.

I then had a nap, as I hadn't got a whole lot of sleep while I was gone, then I headed out to a friends for BBQ and drinks. We were there for a while, then we went to the Blues Festival. This is the second year that I've been. Both times its been great.

I never really thought of myself as much of a blues fan, but its so much fun to sit on the grass, in the sun listening to it. I was there with the wbf, and it was so nice.

At about 10pm it was fireworks time. They had two barges set up on either side of the Hawthorne bridge. I love fireworks. The wbf put his arms around me as we watched.

It was such a lovely birthday eve.
Posted by Caroline at Thursday, July 10, 2008