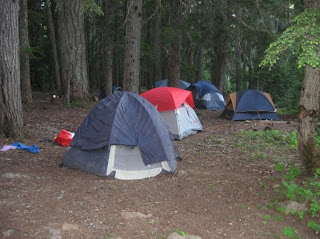 It was a month ago today, so figured I could write about it now. I had a great week leading up to July 4th. A group of my friends go camping up at Timothy Lake every year for July 4th, (as my birthday is July 5, it becomes a week long birthday celebration too). This year I turn 30, so I was determined to have a great time and celebrate. I am sometimes surprised I’ve made it this far, given I am extremely clumsy. I mean… I have been known to walk off a cliff in the pitch black night, fall out of trees and generally just trip and stumble here there and everywhere, luckily never while crossing the road with on coming traffic.

So anyways… we were up the mountain at Timothy Lake, sleeping in tents and keeping warm by the camp fire. The days were gorgeous perfect temperatures in our shady spot by the creek. However, at night… at night it was really cold, so cold in fact that the ice in our coolers refroze and we had to pry our food from the ice blocks. You may think I am exaggerating but I kid you not, it really was that cold at night, you just have to love those mountain summers. OK, to be perfectly honest, it was only that cold the first 2 nights, it did start to warm up a little as the week progressed.

We pretty much spent the week drinking and talking, playing drinking games such as drink while you think. Been as we had a lot of fruit and plenty of vodka and gin, we decided to make up some jungle juice. We thought that one of the empty 2 gallon water jugs would make a great container for said juice, so we got to squishing berries, oranges and limes in Ziploc bags, mixing in a little vodka while still in the squishing process. Once the berries were squished we cut a corner in the bag and poured it into the water jug thingie. Then we added the vodka, gin, lemonade, and pretty much anything else we could find that would taste good. Then we left it in a cooler of ice for a few hours. Oh my, it was so tasty. We purposely didn’t make it too strong either, thinking if people wanted it stronger they could add more berries/juice, erm i mean, more vodka or gin to their serving. Good times.

I spent a total of 4 nights up on the mountain, the wbf came out to join me for the last 2 nights, he couldn’t come sooner because he had to work. Well, when he arrived I was so happy, not just to see him, as I had missed him after 2 lonely nights in a very cold tent, but because 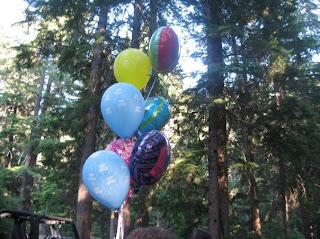 he had a car full of balloons. By the way I love balloons, they just make me smile. He originally had brought 10, but 3 hadn’t made it, but I didn’t care, 7 big shiny balloons all for me. I was requested to tie them to my chair, and I felt like the birthday queen. I was all happy, that is until, all the small children started eyeing up my balloons… then started to ask me if they could have one. There were a lot of kids camping with us, and I knew as soon as I gave one away, they’d all be gone. I normally have no problems with sharing, but on this occasion I felt very selfish I wanted my balloons to myself, and I didn’t want them flying off into the woods and up the mountain, or getting popped near the campfire. So, I managed to negotiate, that they could have one (which they got right before bed time, when they went to bed we snagged it back and passed it on to the next child), seemed to be a win-win.

All in all, it was a great week. I’ll tell you more about the week in my next post.
Posted by Caroline at Tuesday, August 04, 2009 No comments:

I am thinking that you may have been wondering what happened to that girl Caroline, who used to write to this little space in the blog world. She hasn’t been around in a few months.
If you thought that I had forgotten about my blog, you would be a little right, but not completely. Truth is the past few months have been a little unsettled. Been as my blog is called song of happiness I didn’t really want to post a bunch of miserable posts. So I saved you from that

I am hoping that things are now settling down some, although I am not feeling very settled as yet, but I don’t intend to bore you with those details.

Instead, I am going to try and think of something else to write about. Maybe one of my public transportation stories.

As you may know I don’t drive (yet – but I have been working on that lately), so I take public transportation to work. It seems I am one of those people that people like to talk to. This morning I was wearing my favourite red shoes. There was a couple of us waiting for the bus, including one lady with a white cane. She checked with me the bus number before we climbed on board and we ended up sitting next to each other.

Now, I learnt something here, as I thought people with white canes were blind, but turns out that is not the case, as she commented on my red shoes - so clearly she could see, although maybe not quite so well. My shoes happened to be the same red as her skirt. Well, by this point she’d heard me talk enough to pick up on my accent, so the discussion began.

She had been to England a long time ago, and had fallen in love with it. We got to talking about where in England I was from, and I was impressed that just by me saying I was from the North East, she was able to rattle off counties in that area, and name landmarks, although she’d never actually got that far north.

Needless to say this was quite a different experience to some of the others I’ve had since moving here, where when asked where I am from and I say England, they think I mean New England…
Posted by Caroline at Monday, August 03, 2009 6 comments:

Labels: Public Transportation, Self, Shoes
Newer Posts Older Posts Home
Subscribe to: Posts (Atom)
Please feel free to comment. I love reading through what people have to say, and I will in most cases comment back either on my blog, and/or will come visit yours.