Tales of the Northeast: There be Geordies here! 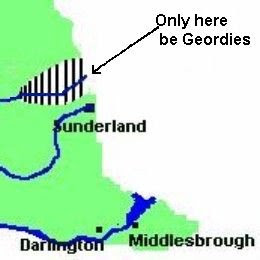 No, not the Northeast USA. No Geordies there. Only New Yorkers. Vermonters. Kennedys.

The Northeast of England, thank you very much. A very special lot, actually.

In my vast studies of the species, I have discovered that not everyone in England pines to be called a Geordie. While I myself would consider it an honor, some take offense when mistaken for a Geordie, especially by the London Bobbies when one is intoxicated. Here is a story I read (but didn't understand a word - perhaps YOU will):
--------

--------
I'm guessing that means Geordies only come from a very particular part of England. So that story may be funny if you happen to be English. I'm not.

The name Geordie is a diminutive of George (referring to "George" as used in Scotland, North Durham and Northumberland.) Something to do with the 1715 Jacobite rebellion, in which the residents of Newcastle remained loyal to George I and were thenceforth known as Geordies. ::Yawn::

Here I get into the history much deeper than even Caroline would care to know, and so I will stop. I only wrote this to give me a chance to say that there is one particular Geordie whom I think is really cool. So. 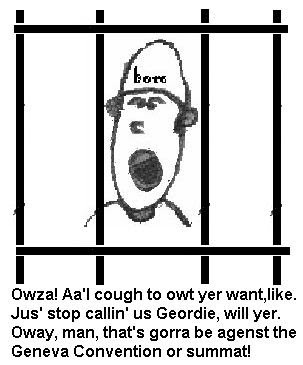