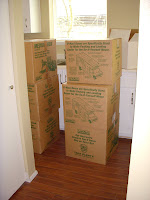 Well I've been gone a few days due to my move. I spent all day Friday packing, Saturday morning moving, Saturday and most of Sunday unpacking. I still have several boxes left to go.

It was fairly uneventful as far as moving goes. I did throw a bit of a wobbly on Saturday, and then another bigger one on Sunday, but I think it was just because of the stress of moving, and tiredness. Luckily my wbf understood, and didn't get upset with me.

Its challenging trying to find a home for everything, the apartment is a little smaller than where I moved from, but not by much. It will all have a home eventually. Most of the boxes that are left are pictures or books, so shouldn't take too long to get finished up.

The wbf, still has quite a bit of stuff to move in, and he has a room, pretty much, of his own, that he can do what he pleases with, although, he has had a few looks from me. I can't help it, I am quite picky, and a bit of a control freak, its hard to let someone do what they want sometimes. I am sure it will look great once he has all his stuff in it though, it will be a proper bachelor room :).

I really didn't do much this past weekend other than move, although we did go to his house for a grill and just to hang out with some friends. It was fun, we ended the night with a small jamming session in the basement, that was a lot of fun. Although Caroline was very tired, and ended up crashing in the wbf's rocking chair while he packed up some stuff and finished his beer. 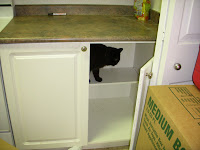 The cats did quite well with the move too. Henry is normally the worst, he is such a softy. He went into the cat carrier without much fuss, which surprised me, and once we showed him his new home, he explored instead of hiding behind the washing machine for hours, which he did when I last moved. He did walk around the apartment growling though, its such a strange noise for a cat to make. Cleo of course has settled in without any problems. She is always happy, so long as she has a place to sleep and some food to eat.
Posted by Caroline at Monday, April 28, 2008