Dirty(ier than a Toilet Seat?) 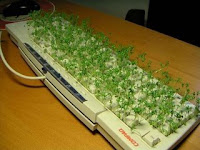 By Sky News SkyNews - Thursday, May 1 04:26 pm
Your computer keyboard could be dirtier than your toilet.

A study from Which? Computing has found some keyboards contained more bacteria than the average lavatory seat.
Researchers took swabs from 30 office keyboards and uncovered a cocktail of bugs that can cause infection and illness.
Two contained staphylococcus aureus which can lead to skin infections and food poisoning.
In one case, a microbiologist recommended that a keyboard be removed as a precaution after finding bacteria readings "off the scale".
James Francis says the contamination is largely due to a lack of proper lunch breaks.
"More and more people are eating at their desks and are transferring from hand to mouth all the time. That is making things worse," he explained.
"Telephones are also a problem. We have found a lot of pathogenic disease-causing bacteria on telephones in hotel rooms, for example.
"It is often down to common sense. If something looks grimy and horrible there is a good chance it is."
Jaclyn Clarabut, assistant editor at Which? Computing, told Sky News Online people have to take responsibility for their office environment.
"People should use alcohol wipes to really get rid of the germs. The best thing is to tip keyboards upside down and watch the crumbs fall out. Once that's gone the bacteria stops growing," she said.
"If people don't clean their keyboards regularly, they might as well eat lunch in the toilet."
Contrary to some advice posted online though, office workers should not take their keyboards home and put them in the dishwasher.
(source: http://uk.news.yahoo.com/skynews/20080501/tuk-health-warning-on-computer-keyboards-45dbed5.html)

Can you believe that, I think that is gross, but its no surprise that more and more people are getting sick at work. I have to admit, that I eat at my desk about 3 times a week, and most of my co-workers eat at their desk on a daily basis. We have those air canister things to clean out the keyboards. However, I have seen those being used more frequently at spraying unexpecting people, rather than cleaning out our keyboards.

I thought that article was quite horrid so I had to share it, I just couldn't keep it to myself. Mummy always told me it was good to share :)
Yukkie, I think I am going to go clean mine out now, just to be on the safe side. 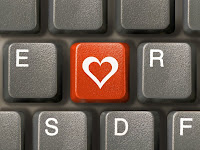 Give your keyboard some love and shake out those crumbs, and give is a clean.
Posted by Caroline at Thursday, May 01, 2008