The village shown in the photo above is Shotely Bridge in Northern England.  Although these buildings are still standing today, Shotley Bridge has grown over even just the past view years. Mostly with residential buildings, the center remains similar today as it was then.  This is the village where I spent most of my childhood.  Growing up the buildings in the right of this photo were a video store, grocery store and news agent.  Now, the building on the right are part of a restaurant.
On the left was a Heritage Center, now I can't even recall what is there.  I spent several saturday afternoon in the Heritage Center learning about my neighbourhood, looking at old photos such as this one.
The photo below is pretty much what is looked like when I lived here (around 1990).

I must admit that I never really saw as much hussle and bussle in modern day Shotley Bridge as there was in the first photo.  There was rarely anyone on the street, other than me and my buddies when I was growing up.

It was a great place to be a child though, we used to spend a lot of time playing down by the river (which is down the road in the back right of the photo).  On hot summer days we used to play in the river.  Good times :) 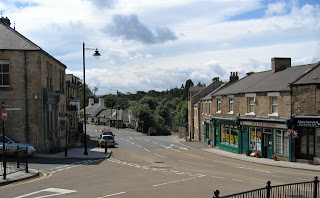 Shotley Bridge roots began around the 17th century as some German Swordmakers settled here.  Down by the river you can still find some large rocks with holes in them that were used in the sword making process.

SEPIA SATURDAY is a weekly meme which encourages bloggers to publish and share old images and photographs. All that is required is for contributors to post an old image (it doesn't have to be in sepia) and provide a few words in explanation. If you could provide a link back to the Sepia Saturday Blog and visit as many of the other contributors as you can, it would also be appreciated. There is no weekly theme, as such, but some people like to use the archive image published with the weekly call as a kind of theme. There is no requirement to adopt such an approach : the choice of image is entirely up to you. Once you have published your Sepia Saturday post, add a link to that post to the Linky List published each week and leave a comment to let everyone know you are joining in.