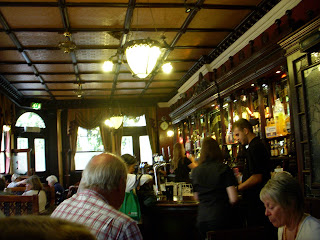 I just got back to my parents house, well I say just, it was about an hour ago but that's just enough by my book.
It's been a fun few days. I arrived on Friday without a hitch, flights we all on time, and although I didn't get any sleep, it was ok. I manged to get a good nights sleep on Friday night, which seems to have kept at bay any jet lag.
I've uploaded the few photo's I've taken so far, its not so many, but its a few.
Saturday, of course I slept in, and missed most of the day, but as its raining lots, I don't think I missed too much. Saturday afternoon, I headed to the first Sunderland game of the season, they were playing Liverpool. I was in the stands with my brother, I enjoyed a beer and a pie (Scrummy), then we watched the game. It was a great match, other than Sunderland losing 1-0 in the 84th min. I took a few photos, so you Americans can see what proper football looks like.
Sunday, myself and my family caught the train down to London. It only takes about 3 hours, I am sure it used to take so much longer when I was a kid, but I am not sure if that is true or not, or if its just my memory playing tricks on me. Once in London, and checked into the hotel, the four of us headed out for lunch before going to the Hay Market to see a show - Brief Encounter. It was great. It was based on the movie from 1945. I would really recommend seeing it, the cast were extremely talented, but I don't want to give too much away.
Monday morning was spent at the embassy sorting out my visa stuff, it also like my flight went without much effort, which was nice. Monday afternoon we went to a pub for lunch (hmmm, I had another pie... and chips), then had a quick wander around the British Museum. In the evening we went to go see We Will Rock You, it was fun.
Tuesday, one of my good friends that I know from Holland flew into London and we met up and shopped. We walked so much. Had lunch in a different pub, this time I went for scampi and chips. I went to Harrods for the first time, the food hall was incredible, I didn't want to leave, but we finally did. In the evening I had plans to meet up with a friend of mine who I've known since I was 6 or 7. We used to get up to so much mischief (but that's another story). I haven't seen her in years, since we were both at university, but as soon as we saw each other it was just like old times, we were giggling and reminissing in no time. The 3 of us went to Soho for dinner, we had very tasty Korean food.
Today wasn't as eventful, I took the train back to my parents, and that's where I am now.
Posted by Caroline at Wednesday, August 20, 2008